Danbury Area Home Prices Up In Past Year

Danbury Area Home Prices Up In Past Year

Here is how much home prices have changed over the past year in Fairfield County area.

DANBURY, CT — Higher home prices are here to stay, at least for the next couple of years, experts say.

The coronavirus pandemic helped push home prices higher, but it isn't the only factor responsible for the market shift. The number of homes listed for sale is at a historic low, meaning that supply is tight. Meanwhile, demand has increased because of historically low mortgage interest rates and because a large contingent of millennials is looking to buy their first homes.

Home prices in the Bridgeport-Stamford-Norwalk CT Metropolitan Statistical Area, which includes Fairfield County, were up 16.6 percent for January 2021 compared with January 2020, according to the CoreLogic Case-Shiller Index, an oft-quoted measure of price movements over time.

Prices in the bottom third (less than $458,000) of the Bridgeport-Stamford-Norwalk CT Metropolitan Statistical Area market — often designated as starter homes —increased 13 percent year over year. The top third of the market (homes over $766,000) saw a 20 percent increase.

The Flagstaff, Arizona, metropolitan area saw the biggest year-over-year increase in January, at 24.1 percent, followed by the Boise, Idaho, area at 22.2 percent and the Bend-Redmond, Oregon, area at 22.1 percent.

Less than 1 percent of metro areas saw a year-over-year price decrease, according to the Case-Shiller Index. 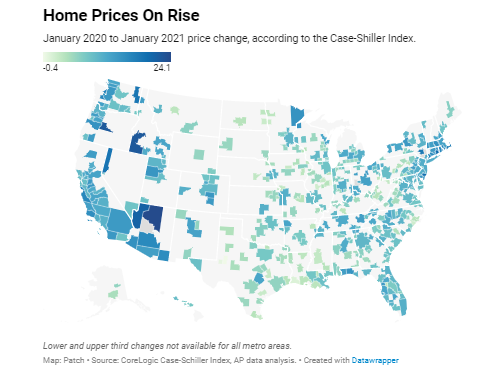 Spring 2021 is poised to be the most competitive home buying season in decades. A recent analysis of Realtor.com listings by the National Association of Realtors found that 64 percent of metro areas posted double-digit increases in year-over-year median listing price. Only 1 percent of metro areas had more active listings on Realtor.com in March 2021 than in March 2020.

A number of factors led to the historic ramp-up in home prices, said Gay Cororaton, director of housing and commercial research for the National Association of Realtors.

The main factor has been the historic lack of supply in the housing market, Cororaton said. Inventory is at its lowest point since 1982.

It could be some time before the housing market returns to a sense of normalcy, she said. The current inventory is about two months of housing supply; supply and demand are closer in sync when there is a six-month supply.

"I think it will take time to do that," Cororaton said. "At least in the next two years, I would expect we would be running around two to four months of supply."

The pandemic has also made homeowners wary of letting potential buyers into their homes for showings or open houses, Cororaton said.

Historically low mortgage rates have pushed up the demand side of the equation, Cororaton said. Rates aren't expected to rise above 4 percent in the next two years, which means borrowing will remain affordable.

The National Association of Realtors monthly survey of its members found that four buyers are competing for every home sold, compared with three buyers at the same time last year.

Editor's note: This post was automatically generated using an analysis of the Case-Shiller Index data from CoreLogic Inc. by The Associated Press. Please report any errors or other feedback to content@patch.com.