MannKind is bringing 100 jobs back to its Danbury manufacturing facility, as the Food & Drug Administration initiates a “priority review” of a pulmonary arterial hypertension treatment that would be administered through inhalers prescribed by doctors.

The Westlake Village, Calif.-based pharmaceutical company is working on Tyvaso DPI alongside United Therapeutics, which has its headquarters in Silver Spring, Md. 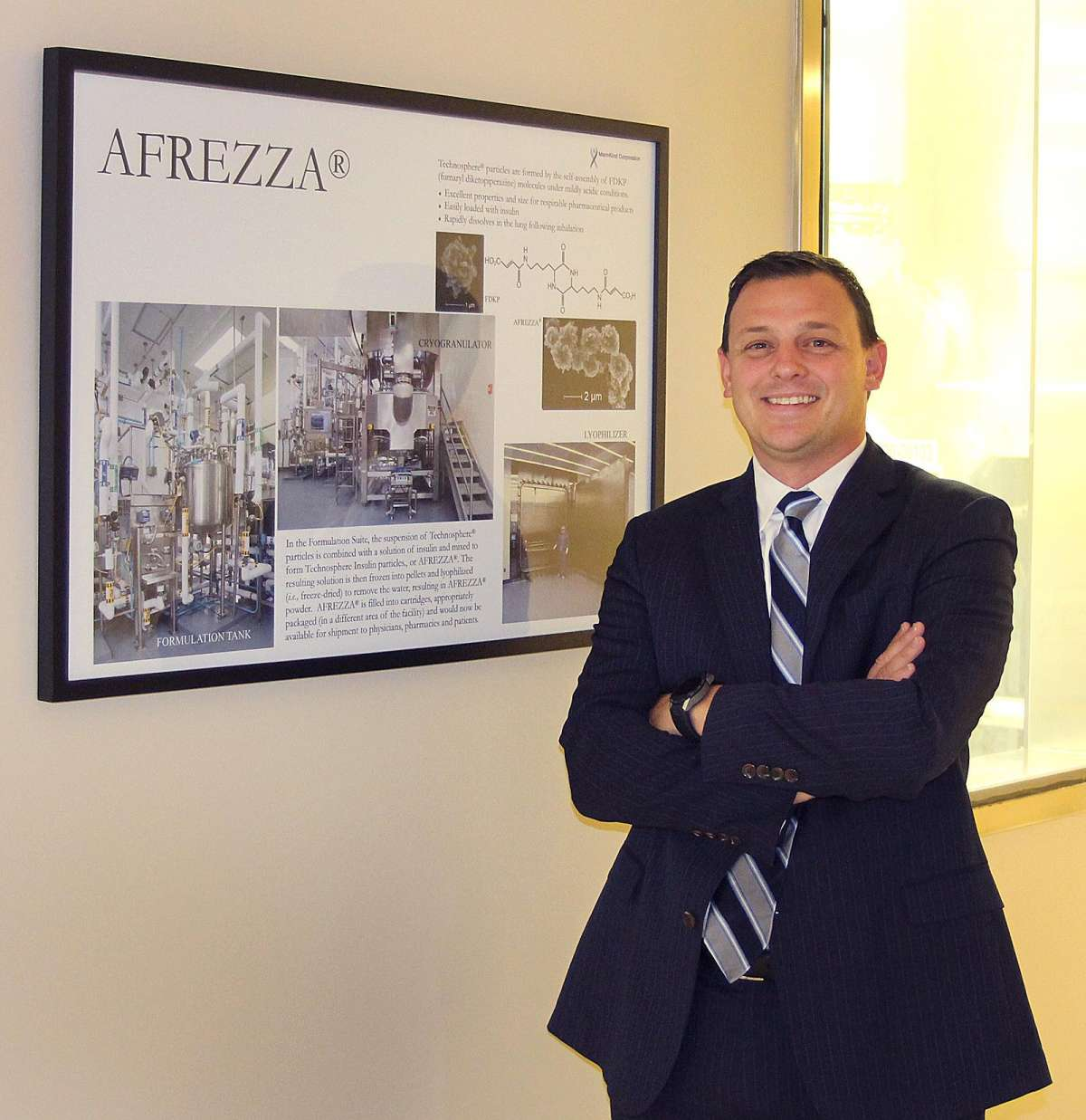 MannKind CEO Mike Castagna in June 2017 in Danbury, Conn. The company plans to hire as many as 100 people for the production facility in expectation of Food & Drug Administration approval of a drug to treat hypertension. Chris Bosak / Hearst Connecticut Media

The Centers for Disease Control & Prevention describes pulmonary hypertension as excess blood pressure in arteries leading from the heart to the lungs. It is a rare disease that effects larger numbers of women than men, with pharmaceutical companies coming up with multiple approaches to managing symptoms but having yet to land on a cure.

Farmington resident Carol Morrison is on an existing United Therapeutics treatment for pulmonary hypertension, and runs a support group for about 30 patients as a Connecticut chapter of the Pulmonary Hypertension Association, which has its main office in Silver Spring.

“If someone is diagnosed in stage one, they’re just noticing some shortness of breath they didn’t have before — but very rarely does someone get diagnosed [early] ... because the symptoms are very similar to asthma or COPD,” Morrison said. “The most severe is that you are on oxygen 24-7 — everything you do makes you short of breath, even dressing or talking on the phone. ... Your heart just gives out eventually because it has to work so hard to get the blood through the lungs.”

MannKind expanded in Danbury in 2008 at a cost of $114 million to make Afrezza, an insulin drug for people with diabetes that is delivered via inhalers. Danbury workforce numbers have bounced around since depending on Afrezza sales.

The company expects to hire up to 100 additional people to support Tyvaso DPI production, with about 50 openings today in Danbury. MannKind expects the FDA to complete its review in October, with the agency having yet to identify any issues of concern.

“Your lungs are half the [area] of a tennis court — so they’re a ... great mechanism to get drugs into the body,” said Mike Castagna, CEO of MannKind, in a Wednesday telephone interview. “Inhalation is probably one of the fastest ways you can get resolution of symptoms. The lungs aren’t perfect for every type of drug, but ... the lungs are incredible mechanism.”

In response to a question, Castagna said that MannKind remains open to applying its inhaler technology to any potential treatments for COVID-19, with the virus’ complications caused by a spike protein that lodges in lung tissue.

“We have the ability to make 300 or 400 million doses in Danbury, so when you think about the government looking for U.S. manufacturing [and] scale, we have all those ingredients,” Castagna said. “A booster vaccine — that’s something that we probably could put in our technology.”

The hypertension inhalers will have a similar design to the Afrezza devices which contain a dry powder. United Therapeutics and MannKind plan to include a “BluHale” wireless accessory that will allow patients to track their doses on a mobile app.

United Therapeutics led the submission of Tyvaso DPI, with MannKind to get “low double-digit” royalties in its words on sales.

In Danbury, MannKind is seeking people to fill a range of roles to include manufacturing, engineering and warehouse operations. Castagna himself joined MannKind the day that founder Al Mann died, with Mann having a range of inventions to his credit across high-tech and life sciences including insulin pumps.

As the company awaits the FDA’s decision on Tyvaso DPI, it is also working to get approval to sell Afrezza in overseas markets including Europe and India.

“It’s going to be a global brand — all being made in Danbury,” Castagna said. “Growing your talent base is a challenge for all companies right now, no matter how much your paying or types of jobs. I encourage people to apply — you may be able to get a ‘stretch’ assignment that you wouldn’t normally get.”